The 1836 Project creates an advisory committee with the mission of promoting patriotic education and increasing awareness of the values that make Texas the most exceptional state in the nation. An educated and informed public is essential to the future of our state. With history being rewritten and culture being canceled, Representative Tan Parker is undertaking the goal of reprioritizing the teaching of history in Texas schools. Our great state's history is worth remembering - here's a short review! 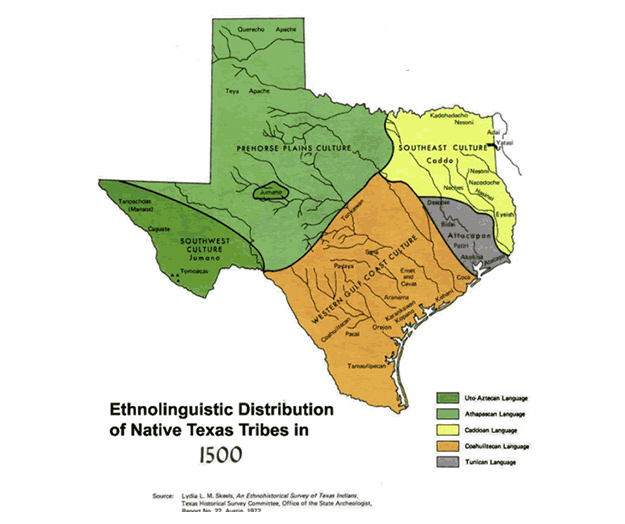 Before Europeans arrived in the 1500s, Texas was the home to several Native American tribes. The Caddos lived in east Texas and were excellent farmers growing corn and sunflowers. The Karankawa people lived along the Gulf Coast of Texas. They were good at fishing and made dugout canoes for traveling. In the northwest lived the Comanche who were hunters and excellent horsemen. To the west and southwest were the Apache who lived in wikiups or teepees. 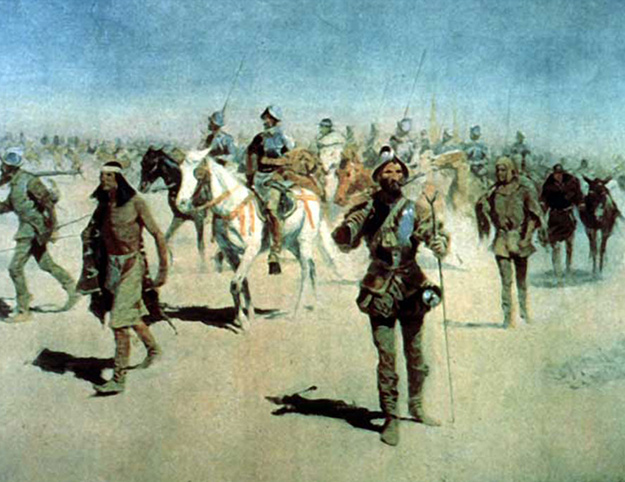 In 1519, the Spanish arrived in Texas when Alonso Alvarez de Pineda mapped the coastline. Another Spanish explorer, Cabeza de Vaca, shipwrecked off the coast of Texas in 1528. He met the local Indians and lived there for seven years. Later, he wrote of gold which inspired the Spanish conquistadors to explore Texas including Hernando de Soto. 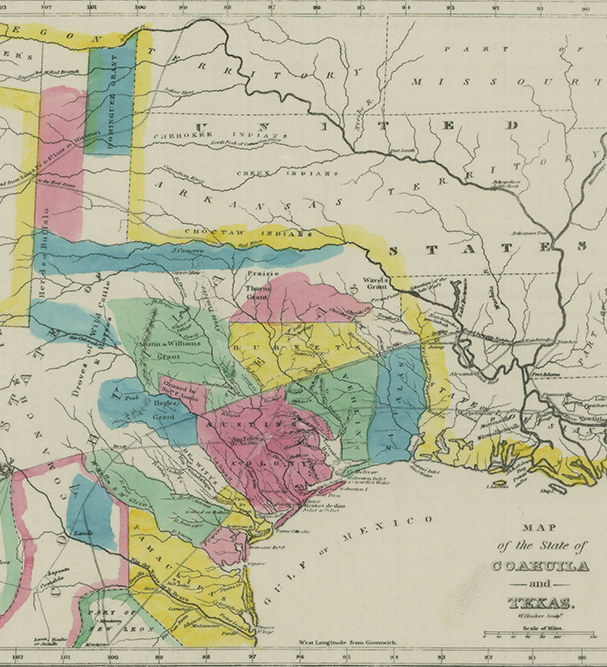 During the late 1600s, Europeans began to settle in Texas. The French first claimed the land when Robert de La Salle arrived and established Fort St. Louis in 1685. The settlement was not fated to last long in Texas, however, and the Spanish soon took over. The Spanish settled Texas by establishing Catholic missions, and built a number of missions across Texas where they would teach the Native Americans about Christianity. In 1718, San Antonio was established with the building of the Mission San Antonio de Valero. The mission would later be known as the Alamo. 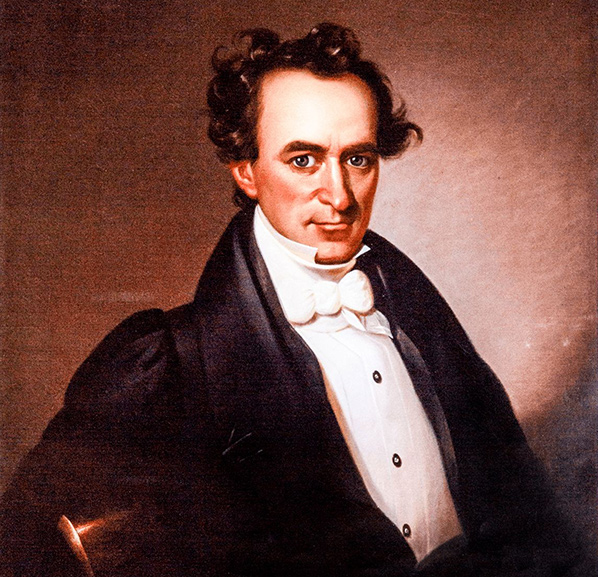 Texas was part of Mexico when Mexico gained its independence from Spain in 1821. As colonization expanded into the territory, settlers began to arrive from the United States. In 1825, American Stephen F. Austin established a colony in Texas. He arrived with around 300 families and settled the land with the approval of the Mexican government. The colony grew rapidly, but also they began to have many disagreements with the Mexican government. 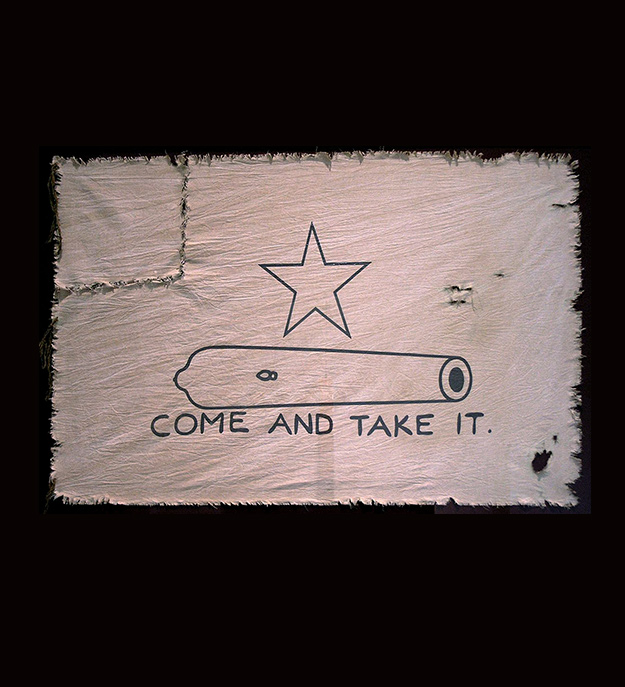 The Battle of Gonzales

Although tensions had been simmering between rebellious Texans and the Mexican authorities for years, the first shots of the Texas Revolution were fired in the town of Gonzales on October 2, 1835. The Mexican army had orders to go to Gonzales and retrieve a cannon there. Instead, they were met by Texan rebels and a tense stand-off ensued before a handful of Texans opened fire on the Mexicans, who swiftly withdrew. It was mere skirmish and only one Mexican soldier was killed, but it nevertheless marks the beginning of the War for Texas Independence. 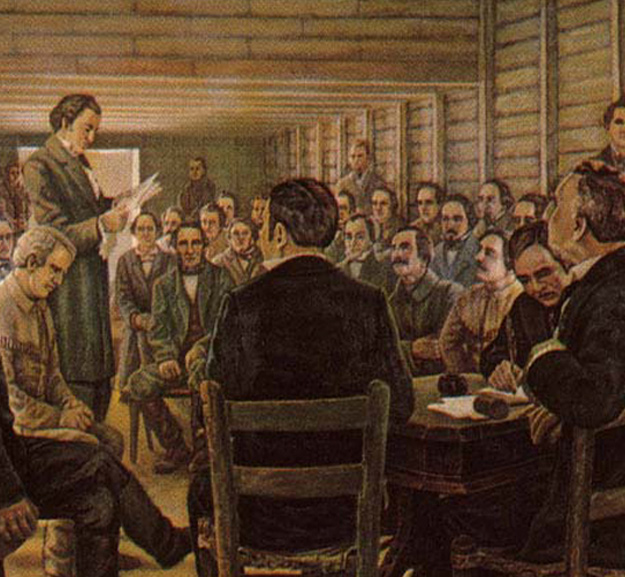 The Texas Declaration of Independence

On March 1, 1836, delegates from all over Texas met at Washington-on-the-Brazos for a Congress. That night, a handful of them hastily wrote a Declaration of Independence, which was unanimously approved the following day. Among the signatories were Sam Houston and Thomas Rusk. In addition, three Tejano (Texas-born Mexicans) delegates signed the document. 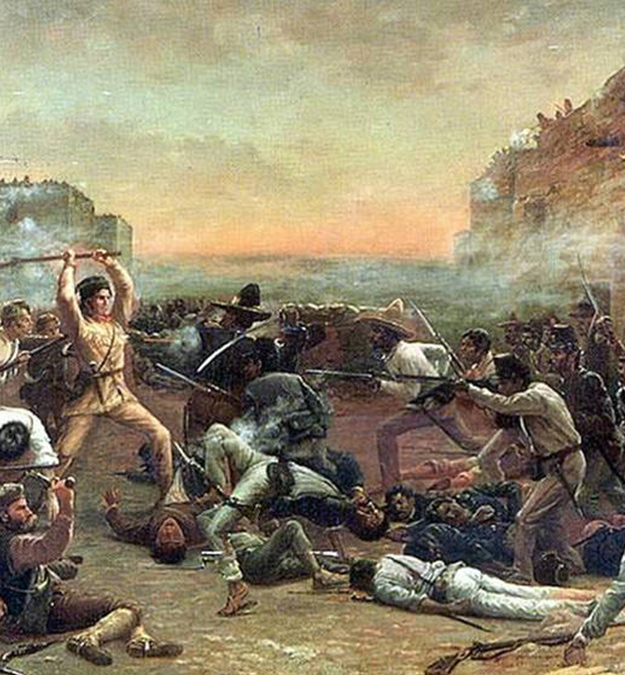 The Battle of the Alamo

After successfully capturing San Antonio in December, rebel Texans fortified the Alamo, a fortress-like old mission in the center of town. Ignoring orders from General ​Sam Houston, the defenders remained in the Alamo as Santa Anna's massive Mexican army approached and laid siege in February of 1836. On March 6 they attacked. In less than two hours the Alamo was overrun. All of the defenders were killed, including Davy Crockett, William Travis, and Jim Bowie. After the battle, "Remember the Alamo!" became a rallying cry for the Texans. 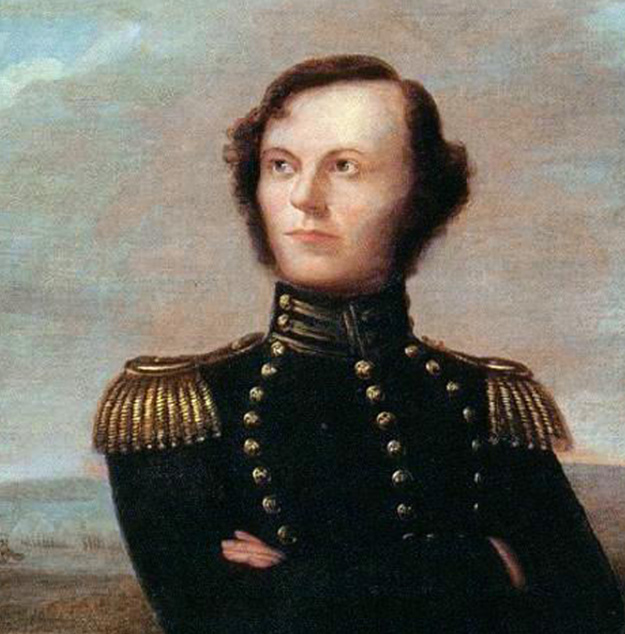 After the bloody Battle of the Alamo, Mexican President/General Antonio Lopez de Santa Anna's army continued its inexorable march across Texas. On March 19, some 350 Texans under the command of James Fannin were captured outside of Goliad. On March 27, nearly all of the prisoners (some surgeons were spared) were taken out and shot. Fannin was also executed, as were the wounded who could not walk. The Goliad Massacre, following so closely on the heels of the Battle of the Alamo, seemed to turn the tide in favor of the Mexicans. 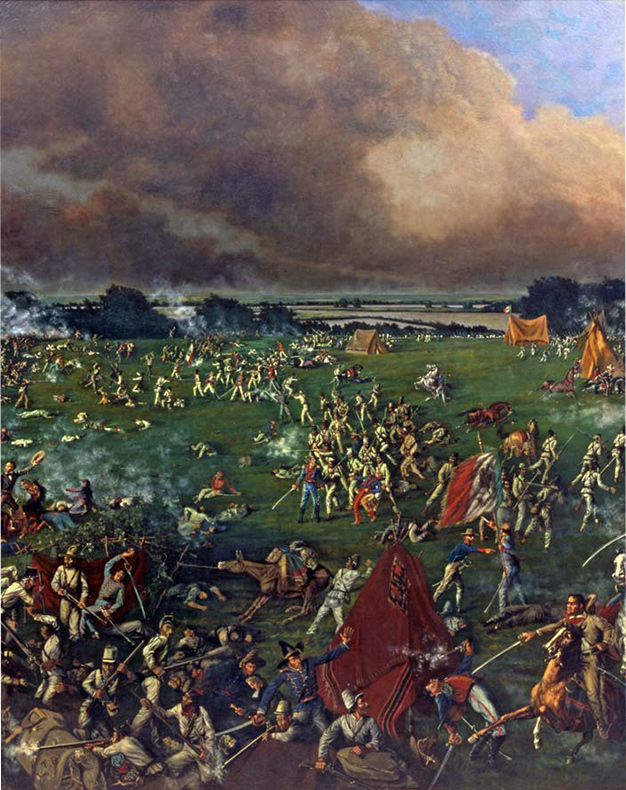 The Battle of San Jacinto

In early April, Santa Anna made a fatal mistake: he divided his army in three. He left one part to guard his supply lines, sent another to try and catch the Texas Congress and set off in the third to try and mop up the last pockets of resistance, most notably Sam Houston's army of some 900 men. Houston caught up to Santa Anna at the San Jacinto River and for two days the armies skirmished. Then, on the afternoon of April 21, Houston attacked suddenly and ferociously. The Mexicans were routed. Santa Anna was captured alive and signed several papers recognizing Texas independence and ordering his generals out of the territory. Although Mexico would try to retake Texas in the future, San Jacinto essentially sealed Texas' independence. 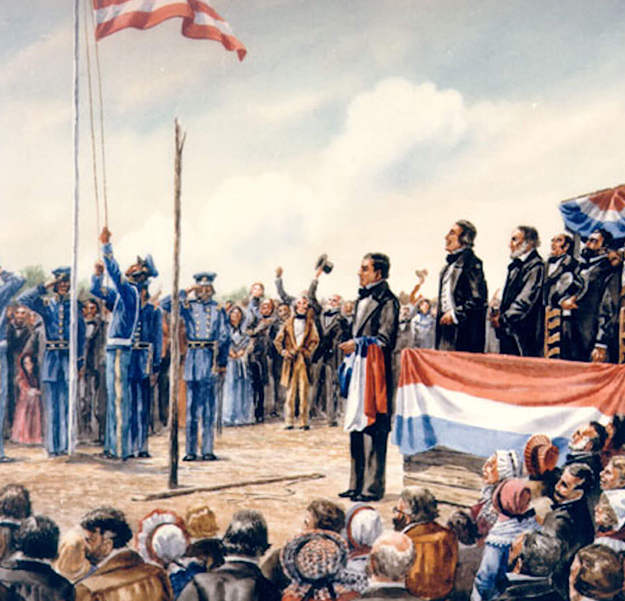 Texans had declared independence and created a republic, but the new nation was still very vulnerable to attacks from Mexico. A movement to join the United States through annexation began, even while others still wanted to remain independent. As a trusted leader, Sam Houston convinced the Texan political leadership that joining the United States would offer Texas protection from Mexico as well as new trade partners. On December 29, 1845 Texas was admitted as the 28th state to the Union. 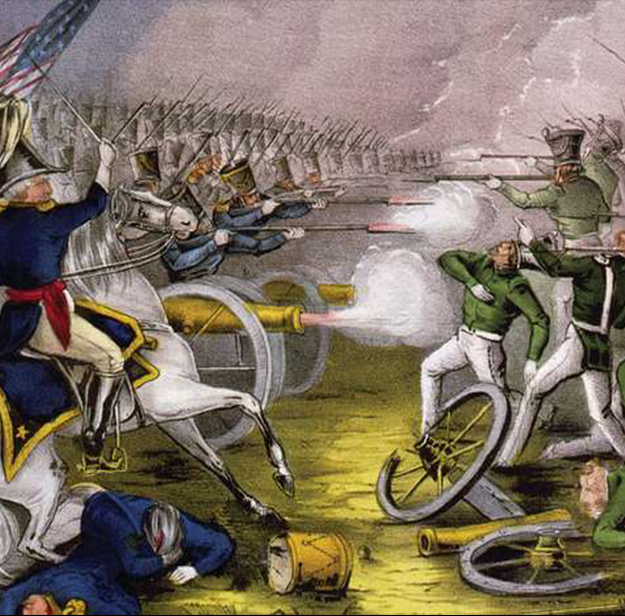 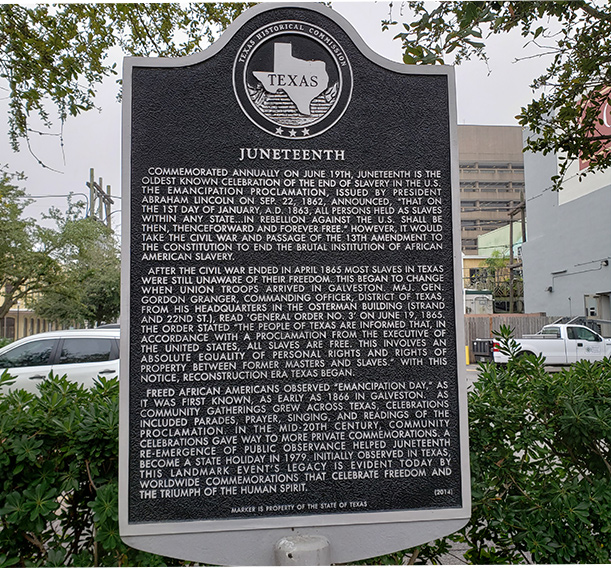 In 1861, when the Civil War began over slavery, Texas seceded from the Union and joined the Confederacy. While there was little actual fighting during the war in the state of Texas, Texans served in battles across the war. After the Confederacy lost the war, slaves in Texas did not find out until a month later on June 19, 1865. This day is still celebrated today as Juneteenth. Texas was readmitted into the Union in 1870.

The fight is on to keep Texas the beacon of freedom for America and the world. Texans don’t back down from a fight, and we cherish our history, our values and our God-given rights. Join me to help keep Texas strong now and long into the future!

Thank you! Your submission has been received!
Oops! Something went wrong while submitting the form.